Eurotunnel Group: Activity in the Third Quarter of 2014

“This summer Eurotunnel set new records for traffic and this momentum is continuing. The energy in the UK economy and the application of the Marpol environmental regulations to the ferry companies from January 2015, strengthen the Eurotunnel Group’s competitive advantages”. 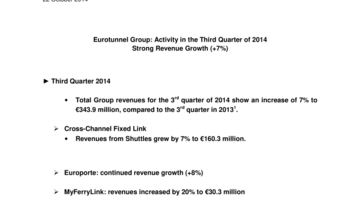 Eurotunnel Group: Activity in the Third Quarter of 2014