“Eurotunnel has had a record year in 2014, with a strong growth in all areas of its business. The year of the 20th anniversary of the opening of the Channel Tunnel has been dynamic: Eurotunnel continues to invest to maintain its leadership”. The total consolidated revenues for the Eurotunnel Group for 2014 reached €1.207 billion, growth of 7% compared to 2013.

The inherent advantages of the Tunnel - speed, reliability, frequency and respect for the environment - are greatly appreciated by customers. This can be seen in the increase in the number of passengers transported: almost 21 million passengers this year. Truck Shuttles: continued growth in the UK economy has helped Truck Shuttle traffic to continue its growth (+6%), in a market that expanded by 8% over the full year in 2014. The market is at levels not seen before and the crisis of 2007 has now been completely wiped out. In a context of strong Competition, Eurotunnel has maintained its historic position with a market share of 37.8%.

Passenger Shuttles: Traffic has remained strong and continued to grow (+4% for cars) and has broken through the level of 2.5 million cars in a cross-Channel market which grew by only 1.5% in 2014. This performance is all the more remarkable as it follows on from a previous year of strong growth. Shuttle market share for cars grew to 51.5% in 2014.

Overall, although competition remains strong in the cross-Channel market, customer loyalty to Eurotunnel services is clear. The refurbishment of the terminals and the modernisation delivered, including moving from 3G to 4G for mobile services mean that the Tunnel has brought real connectivity advantages.

High speed trains: Eurostar improved its performance compared to the previous year (+3% compared to 2013). The launch of new services announced by Eurostar - London-Lyon-Marseille in 2015 and London-Amsterdam in 2016 - are positive signs for future traffic growth.

Cross-Channel rail freight has seen double digit growth in 2014 (14% more trains in 2014 and tonnage increased by 21%), mainly due to intermodal and automobile components flows combined with the favourable impact of the ETICA (Eurotunnel Incentive for Capacity Additions) scheme which incentivises new routes.

Europorte has played its role as a vector for growth with a revenue increase of +8% coming from new contracts and the extension of existing agreements. Europorte has proven its flexibility, having had to adapt to new routes required by cereal transport customers who suffered from difficult harvest conditions which led to new transport solutions being offered.

The Dourges-Barking route, with five trains per week, is a real proof of the competitive advantage of cross-Channel rail freight compared to road and sea. It shows that the reliability of rail freight over medium distances is a real benefit for transporters who increasingly care for the environment.

The British and French subsidiaries are now firmly established as the third operator in each of the two countries. Following the liquidation of SeaFrance on 9 January 2012, Eurotunnel acquired three ships from the Paris Commercial Court in July 2012 and, as a ferry owner, subcontracted the operations to an independent company, the SCOP SeaFrance. This new business, which started services on 20 August 2012, has seen its revenues grow from €7 million in 2012 to €93 million in 2014. MyFerryLink registered a strong growth of its traffic: truck (+22%) and cars (+7%). Thanks to the good quality of its service and despite legal proceedings with the UK competition authorities MyFerryLink has become a major player in the cross-Channel transport market

However on 9 January 2015, the Competition Appeal Tribunal confirmed the decision of the UK’s Competition and Markets Authority to ban MyFerryLink from operating within six months, The Eurotunnel Group which has already appealed twice, has announced that it is seeking a buyer for MyFerryLink. 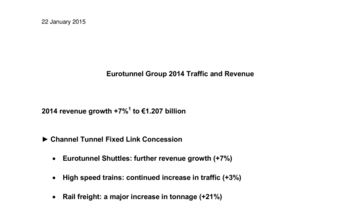