A total of almost 19 million people and close to 17.7 million tonnes of freight were carried through the Channel Tunnel in 2011.

“In a difficult economic context, Groupe Eurotunnel has had a very good year. Our commitment to rail freight is bearing fruit. The Group is well prepared to seize the opportunities which arise during 2012.” The advantages of the Channel Tunnel, its reliability, its speed and respect for the environment are appreciated by its customers. Shuttle Services have seen strong growth, 10%, in revenue in 2011. The number of cars transported has continued to increase, reaching more than 2.2 million, a higher level than recorded in 2007, alongside more than 1.2 million trucks.

In just short of 18 years, 284 million people and 57 million vehicles have travelled through the Channel Tunnel. Truck Shuttles: Over the year, Freight Shuttle traffic experienced double figure growth, 16%, increased its market share substantially, 3.5%, to reach more than 38% for the full year, culminating at 45% during December. The cross-Channel market for trucks saw a further year of growth (estimated at +5%); the growth in Eurotunnel traffic which was well above the overall market should not hide the contraction in the cross-Channel market as a result of the economic crisis which is estimated at -12% compared to 2007.

Le Shuttle (Passenger Shuttles): Eurotunnel car traffic has proven to be just as dynamic (+6%) even though the cross-Channel market contracted slightly in 2011. It should be noted that 2010 was marked by the paralysis of air traffic following the eruption of the Icelandic volcano, which prompted a major transfer of traffic to surface routes. Eurotunnel increased its market share by almost 3 points in 2011, with customers who were concerned about the control they have over their travel arrangements (storm delays, industrial action), choosing Le Shuttle as a reliable and cost effective alternative (when travelling  with  several  passengers  per  vehicle,  crossing  with  Le  Shuttle  can  bring significant savings). The Tunnel has retained a strong competitive position and has shown growth above that of the ferries, underlining the strength of its model and the efficiency of its staff in adapting to sudden changes in demand. During each of the holiday periods, which are crucial moments for transport operators, Eurotunnel carried more cars than in 2010.

Overall, even though the economic crisis is not yet over and the competition remains fierce across the Channel, customer loyalty to the Eurotunnel service is clear. The high frequency of Shuttle departures, the speed of crossing, the punctuality and the minimal impact on the environment are what continue to attract business users and passengers to Eurotunnel. In the fourth quarter, the problems at SeaFrance added to the growth in both truck traffic, which increased by 13%, and car traffic (+12%).

Passenger trains Eurostar: The growth apparent in the first half year slowed in the second. Eurostar continues to maintain its progress, despite a reduction in capacity provided (2 return trips less per week day, between London and Paris and London and Brussels, compared to 2009), and as a result carrying close to 9.7 million passengers, just short of the goal of 10 million. Exceptional to come, such as the Jubilee celebrations in June and the London Olympic Games in the summer, should enable new records to be reached in 2012.

Train operators: rail freight services: For the first time in 7 years, the regeneration can be seen in concrete results with the launch of new intermodal services. The increase in the number of freight trains (+14%) and the increase in tonnage (+17%) prove that many companies, now convinced of its reliability and punctuality, are returning to cross-Channel rail freight. Rail freight is a mode of transport for the future, competitive and respectful of the environment.

The rail freight subsidiaries have played a full part as a vector for growth. Europorte has seen a substantial increase in revenues (+26% like for like) as a result of the signature of new contracts and the maintenance of all the established Europorte France contracts. Industry has shown its confidence in the way the group is developing rail freight based on service quality, punctuality and satisfactory working conditions for the employees. To continue in this vein, Europorte has made significant investments in rolling stock and recruitment. The vitality of GB Railfreight, the third largest rail freight operator in the UK, and of Europorte Channel has been maintained, with GB Railfreight establishing new links to Italy and Europorte Channel lines to Spain for the refrigerated transport of fruit and vegetables. 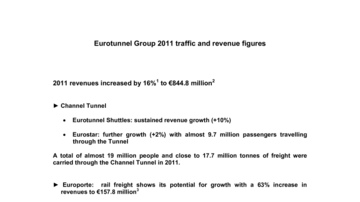