Today, Thursday 18 October 2012, Eurotunnel celebrates the arrival of the 300 millionth person to travel through the Channel Tunnel since the start of commercial services in June 1994, the equivalent to almost five times the population of the United Kingdom.

Since opening, 57% of these 300 million travellers have been customers of Eurotunnel’s Shuttle Services, which link Folkestone, in Kent, to Coquelles, in the Pas-de-Calais, via the Channel Tunnel in just 35 minutes.

On average, since opening in 1994, almost 50,000 people travel through the Channel Tunnel, in complete safety, every day.

“The Channel Tunnel is a vital link between Great Britain and the continent which has revolutionised transport behaviour. This unique piece of infrastructure has created a market which could not have existed if it had not been built and has, as a result, made a significant contribution to economic development”. 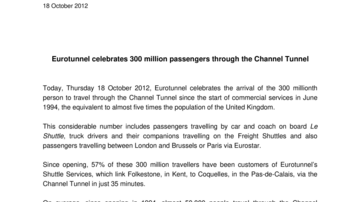