Eurotunnel has today carried the 12 millionth truck to travel on its Freight Shuttles beneath the Channel, since opening for business in July 1994. Placed end to end, this would be enough trucks to go around the earth 6 times.

The 12 millionth truck belongs to RH Freight, based in Nottingham.

The driver of the 12 millionth truck, Ian Ecob said, “R H probably use the Tunnel approximately 450 times per week. It is definitely the most reliable and convenient service for a driver like me”.

In common with a growing number of Eurotunnel’s large European haulier customers, RH Freight has a long term contract based on a guaranteed number of crossings per year. This type of contract, of between two and five years, guarantees the company close to 1 million Channel crossings.

Since opening for commercial services in 1994, Eurotunnel has become the world leader in Piggyback transport. With its fleet of sixteen truck carrying shuttles, Eurotunnel offers road hauliers up to one departure every ten minutes, unrivalled by its maritime competitors. In 2006, Eurotunnel Shuttles carried 1,296,269 trucks and, in the first quarter of 2007 349,359 trucks, an increase of 11% compared to the first quarter in 2006.

As a result of this growth, in order to pursue continued improvements in service to customers, Eurotunnel has taken the decision to invest c £1 million in new terminal infrastructure during 2007. The first major project to be implemented will be a new larger and more accommodating parking and driver services area at the entrance to the terminal in Coquelles.

Jo Willacy, Eurotunnel Commercial Director was delighted by the news,

“This is a fantastic result for us. Our traffic is growing, our revenues are up and our service is second to none. I am delighted to be able to welcome our 12 millionth truck today and to thank RH Freight for their loyal custom”. 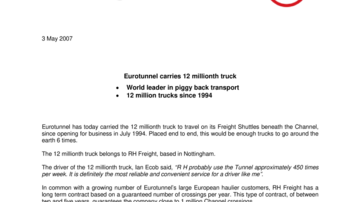