Eurotunnel, the world leader in Piggyback transport, has carried 10 million trucks since 1994

Yesterday, Tuesday 24 January 2006, at 15:30, Eurotunnel carried a Spanish truck beneath the Channel from Coquelles to Folkestone, its 10 millionth truck since opening for business in July 1994.

The truck belonged to the Spanish company, Capitrans, from Murcia province in the south east of Spain. Capitrans organises some twenty trips per day, transporting fruit and vegetables to the UK. Using Eurotunnel to cross the Channel ensures a rapid, reliable and on time service for its customers.

The driver of the 10 millionth truck, José Antonio Martinez, said, “I have been on the Spain-UK route for 9 years, doing 8 crossings a month through the Tunnel. The service is excellent, the welcome is great. But for those of us who are transporting fresh produce, it is the crossing time, the frequency of departures and the ease of use that make the difference.”

Since opening for commercial services in 1994, Eurotunnel has become the world leader in Piggyback transport: in 2005, Eurotunnel Shuttles carried 1,308,786 trucks (representing 17 million tonnes of goods). On 10 March 2005, Eurotunnel also broke its own record for volume with 6,506 trucks carried in one day.

With its fleet of sixteen truck carrying shuttles, Eurotunnel offers road hauliers a departure every ten minutes at peak times, with 250 departures each day. 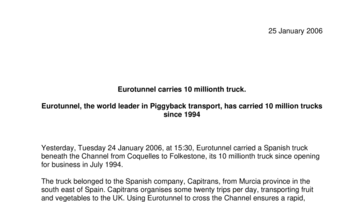