Eurotunnel is bringing an additional half Shuttle (rake) into service to transport cars between Calais and Folkestone, thus increasing capacity in the lead up to the Queen’s Diamond Jubilee celebrations and the London Olympic Games. As a result of the interest in these events, sharp peaks of traffic are expected between the continent and Great Britain.

The new rake will enter service this morning in Coquelles, Pas-de- Calais, in front of invited guests from both sides of the Channel. The new 12 wagon rake will be launched by the French Olympic rhythmic gymnast, Delphine Ledoux.

The rake is 400 metres long and is composed of 14 wagons (12 carrying and two loading wagons) plus the two locomotives. It has been constituted from the re-commissioning of stock material. The project to bring the rake into service started in September 2011, since when it has required 250,000 hours of work, 322 km of cabling, and the installation of 89,000 parts and components. 180 people have worked on the project for a total cost of €10 million.

An additional improvement to the Eurotunnel Le Shuttle service this summer is the increase in the speed of the Shuttles to 160 kph (from 140 kph), which will reduce crossing times to less than 30 minutes; this will enable the timetable to accommodate up to five departures per hour in each direction.

“Eurotunnel is looking forward to the Olympic Games in London where the values of performance, innovation and rigour, to which we adhere, will be celebrated. We have invested and we are ready to meet the growing demand from our customers.” 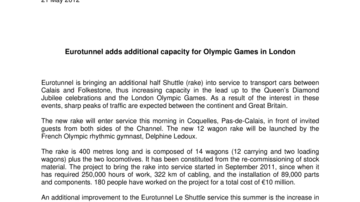