“Despite the difficult economic conditions, Eurotunnel’s activities are showing positive signs. The fourth quarter proves that we are on the right path to regain market share and demonstrates customer confidence in our performance. The advantages of Eurotunnel’s transport system - its reliability in all weather, its speed and its respect for the environment - have enabled the Group’s performance to hold up in the context of the economic crisis and put us in a good position as recovery kicks in”. Total consolidated revenues for Eurotunnel in 2009 amounted to €571.1 million not including insurance indemnities, a reduction of 16% compared to 2008 based on a constant exchange rate of £1=€1.119, the average rate for 2009. The end of the year shows the beginning of an improvement in activity, but this is compared to a period in 2008 that was heavily impacted by the fire.

Revenues from the Railways were stable for 2009 as a whole, but grew by 4% at a constant exchange rate in the fourth quarter, and did so despite the severe disruptions to the service due to bad weather at the end of the year.

Revenues in 2009 were affected by the reduction in Shuttle capacity at the start of the year resulting from the fire in September 2008 and the consequent non renewal of annual contracts by a certain number of transporters at the end of 2008. The second half of 2009, however, shows a satisfying recovery. Truck traffic grew by 17% compared to the preceding half year. The attention brought to rail activity and a Shuttle Services commercial strategy focused on high contribution customers have enabled an increase in revenues of 7%, at a constant exchange rate, during the fourth quarter of 2009. Overall, even though the fourth quarter is compared to a low base, affected by the fire in September 2008, the growth of activity in the fourth quarter is marked, demonstrating the return of customers attracted by the high frequency of Shuttle departures and their punctuality. The reduced waiting time associated with crossing the Channel via the Tunnel is a major competitive advantage – particularly for trucks – and contributes to the recovery in market share.

Eurotunnel has received €8 million in compensation from the British government.

In 2003, Eurotunnel brought a case before the International Tribunal for Arbitration against France and Great Britain, on the basis that intrusions by illegal immigrants from the centre at Sangatte had disrupted its activities between 2000 and 2002. In a ruling on 30 January 2007, published on 23 February 2007, the Tribunal recognised Eurotunnel’s right to compensation. The Group and the French government reached an agreement in April 2008 for an amount of €24 million to be paid to Eurotunnel, which was accounted for in 2008.

In 2009, the British government signed an agreement with Eurotunnel to pay €8 million, bringing the total compensation to €32 million. 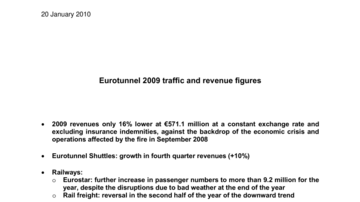