Eurotunnel strengthens its market leadership in a tough year

Eurotunnel, operator of the Channel Tunnel, today reported revenue and traffic figures for the year-ended 31 December 2003.

"2003 has been a tough year for the transport industry. Cross-Channel market conditions were poor with intense price competition having a significant impact on all operators. Despite this, continuing improvement of our already high quality service enabled us to further strengthen our leading market position. We are also pleased to see the recent improvement in passenger numbers from Eurostar.”

In a flat market, Eurotunnel increased carryings by 4% to 1,284,875 trucks, with market share two points higher at 43%. In the fourth quarter Eurotunnel's share was 44%, underpinned by excellent service quality.

Strong competition from the ferries throughout 2003 caused prices to fall across the market, resulting in lower yields and hence revenue from the truck business.

Eurotunnel carried 2,278,999 cars during 2003, maintaining market share at 47%. The Short Straits car market declined by 2% for the full year compared to 2002, reflecting the uncertainty experienced by the European travel market earlier in the year as a result of the Iraq conflict, and competition from low cost airlines offering alternative leisure destinations. Price competition between operators was intense throughout 2003, with extended periods of promotional pricing resulting in lower car revenues.

The coach market contracted by 10% compared to 2002, affected by the same factors as the car market. Despite this, Eurotunnel maintained its traffic volumes, increasing market share by four points to 36%.

**including motorcycles, cars with trailers, caravans and campervans

The Channel Tunnel is also used by other rail services not managed by Eurotunnel – Eurostar for high-speed passenger-only services on London/Paris and London/Brussels, and EWS and SNCF for international rail freight services.

At 6,314,795 the number of passengers* carried through the Tunnel by Eurostar in 2003 fell by 4% compared to 2002. However the fourth quarter saw an increase of 15% compared to the same period in 2002 following the successful opening of the first phase of the UK high-speed rail link on 28 September 2003. This new line enables Eurostar passengers to travel between London and Paris in 2 hours and 35 minutes, London and Brussels in 2 hours 20 minutes, and London and Lille in 1 hour and 40 minutes.

(* The passenger number given is for Eurostar passengers who travelled through the Channel Tunnel, and excludes passengers between Paris/Calais and Brussels/Lille.)

Rail freight tonnage carried through the Tunnel increased by 19% to 1,743,686 in 2003 as the service continued to recover from the disruption to services caused by asylum-seekers during 2002.

Revenues from Eurostar and rail freight services through the Tunnel are protected by the Minimum Usage Charge (MUC) paid to Eurotunnel by the Railways. This agreement continues until November 2006.

Revenue of £25 million was generated from non-transport activities, including retail and telecommunications, as well as several non-recurring land sales made in the last quarter of the year which contributed £7.5 million. 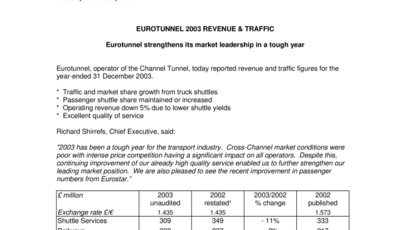