Amid the Diamond Jubilee celebrations, a glittering record for Eurotunnel Le Shuttle: 26,000 tourist vehicles carried in one weekend, exceeding the landmark figure of 10,000 vehicles in a 24 hour period.

For the first time in its history Eurotunnel Le Shuttle has carried more than 10,000 tourist vehicles (*) in a 24 hour period between Folkestone (Kent) and Coquelles (Pas de Calais).

On Friday 1 June, the cross-Channel railway shuttle service transported 10,380 cars and 128 coaches. The previous record had been set on 26 July 2010, with 9,382 tourist vehicles being carried in a single day from England to the continent.

Taking into account the traffic figures for Saturday 2 June, which was also extremely busy, and those of Sunday 3 June, Eurotunnel will have carried more than 26,000 tourist vehicles from Folkestone to Coquelles over a three-day period, surpassing the previous record for the equivalent UK peak holiday departure period at the end of July last year.

The seamless reliability of the Eurotunnel transport system and its intrinsic values made this feat possible: five departures an hour in each direction, a crossing time of 35 minutes and a load factor of almost 100%.

On their return journey tens of thousands of customers will be able to take advantage of the latest improvement to the Eurotunnel service. From 6 June, between 8.00am and midnight, Le Shuttle trains will run at 160kph instead of the current 140kph, giving a crossing time of around 30 minutes.

“I am delighted to see that more and more customers are choosing Eurotunnel for their cross-Channel journey and that, even during a record-breaking weekend, the quality of service offered to customers remained at the highest level: this weekend we transported more than 700 vehicles an hour, with a departure every 15 minutes whilst at the same time maintaining punctuality.” 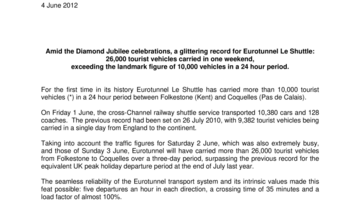 Amid the Diamond Jubilee celebrations, a glittering record for Eurotunnel Le Shuttle: 26,000 tourist vehicles carried in one weekend, exceeding the landmark figure of 10,000 vehicles in a 24 hour period.