A record start to the summer for Eurotunnel: more than 33,000 cars carried by Eurotunnel’s Le Shuttle from Great Britain to France

Eurotunnel’s cross-Channel transport system, Le Shuttle, saw a record start to the summer: from Thursday 25 July to Sunday 28 July a total of 33,280 cars were transported from Folkestone to Calais, demonstrating Eurotunnel’s ability to adjust to peaks in demand.

In order to carry such a volume of vehicles, Eurotunnel’s Passenger Shuttles carried out 758 missions and Eurotunnel had to maintain a high frequency of departures for sustained periods with up to 5 departures per hour, meaning that a shuttle left Folkestone every 12 minutes on average. Friday 26 July was the busiest day of the week, with 10,347 passenger vehicles carried from Folkestone to Coquelles.

Over the seven days to midnight on Sunday 28 July, almost 75,500 passenger vehicles (74,397 cars and 1,026 coaches) travelled between Folkestone, Kent, and Coquelles, Pas-de-Calais. This traffic level is close to the previous record observed during the Olympic Games in August 2012.

Passengers who are now, more than ever, looking for transport which is both fast and environmentally friendly prefer Le Shuttle, which can carry them across the Channel in just 35 minutes.

“In a supply led market, this new record is testament to Le Shuttle’s inherent efficiency and flexibility, with the implementation of an increased capacity and additional departures. Our customers benefit from the continuously increasing quality of our cross-Channel services”. 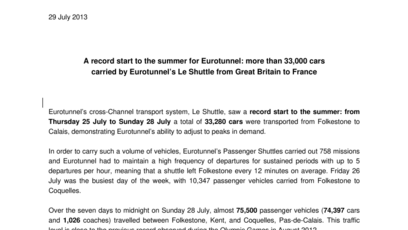 A record start to the summer for Eurotunnel: more than 33,000 cars carried by Eurotunnel’s Le Shuttle from Great Britain to France