Yann Leriche has today become CEO of Getlink, in accordance with the decision taken by the board of directors on January 30, 2020.

Jacques Gounon will remain Chairman of the Board of Directors.

Yann Leriche, 47, was previously CEO of Transdev North America, starting in 2017, in charge of the group's American and Canadian operations, which have 17,000 employees, generate US$ 1.4 billion in revenue, and serve over 100 cities and urban areas with seven different means of transport. He was also in charge of the worldwide development of Transdev’s autonomous vehicle activities. He joined the Group’s Executive Committee in 2014.

Yann Leriche joined Transdev group in 2008. Initially CEO of Transamo, a subsidiary dedicated to consultancy and project management, before becoming CEO of the German subsidiary Transdev SZ and subsequently deputy director of transit activities in North America, in 2012. In 2014, he was appointed as Group Chief Performance Officer.

Prior to this, Yann Leriche had held several posts at Bombardier Transport where he became head of the Direction of Transport Systems “Guided Light Transit”.

He began his career in the public sector, first as a road infrastructure project manager, then in the construction and operation of public transit systems. 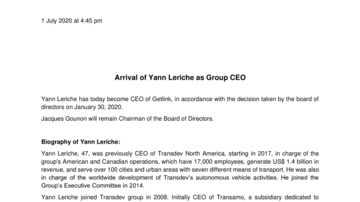 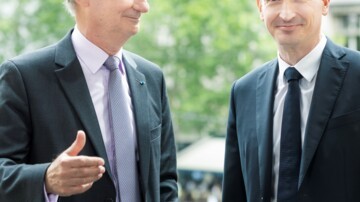 Jacques Gounon, Chairman of the Board of Directors and Yann Leriche, Chief Executive Officer of Getlink

photo
Chairman of the Board of Directors
Chief Executive Officer
View the photo
Receive the news from the Group
SUBSCRIBE NOW!
Follow us on social networks