Tour de France Winner Chris Froome, First man to cycle non-stop from the UK to France under the sea

Chris Froome has become the first man to cycle non-stop between Folkestone in Kent and Coquelles in the Pas-de-Calais, France. In a world first, Eurotunnel opened its service tunnel to enable the Tour de France winning cyclist to cross the Channel, 100 metres below the waves.

Man has been swimming, flying and even driving across the Channel for years. Now, on the day when the world’s top cyclists cross from the UK to France, Chris Froome has become to first man to cycle under the Channel.

In early June, Eurotunnel allowed Froome, Team Sky and support crews from sponsor Jaguar access to the 32-mile service tunnel that acts as maintenance access and emergency exit for the train tunnels. With a cleared run through the service tunnel Froome made the undersea crossing in less than an hour.

The Channel is no stranger to world firsts. In 1875 captain Matthew Webb became the first person to swim its waters while 32 years later Louis Bleriot made the first ever cross-Channel flight. In 1994, Olympic gold medallist Daley Thompson was the first person to walk the Channel, in 1994 again the first Shuttle crossed beneath the waves.

Eurotunnel, Jaguar and Team Sky’s Chris Froome were quick to agree to try for the world-first, which took a team of almost 60 people to organise and film. Timing was everything. Eurotunnel is highly secure environment, with stringent access control regulations. It was crucial to keep normal passenger and freight traffic flowing safely and freely on the day of the record attempt.

As the rest of his team drove onto a Eurotunnel passenger shuttle, Froome exploded off down the platform atop his bespoke, flyweight time-trial Pinarello. Just less than an hour later, Froome burst into the sunlight in Coquelles, punching the warm French air, to be met by his waiting support crew.

As he basked in the soft French sunshine on arrival, Chris Froome simply said:

“There are all kinds of records for people swimming the Channel, sailing it, but to be the first one across on a bike, that’s pretty cool”.

“Cycling through the Channel Tunnel between the UK and France was one of the “Firsts” left in the world. Who better to take on the challenge than the best cyclist in the world today?” 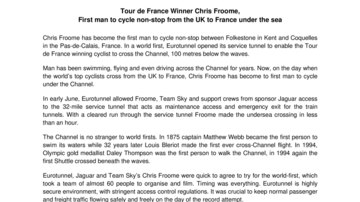 Tour de France Winner Chris Froome, First man to cycle non-stop from the UK to France under the sea