To celebrate its 25th anniversary, Eurotunnel unveils a monumental work of art on the entrance to the channel tunnel

To celebrate 25 years of service, Eurotunnel has unveiled a monumental artwork on the French entrance to the Channel Tunnel and on the seafront at Sunny Sands Beach in Folkestone.

The Franco-British artist YZ was chosen to create this fresco, which extends to over 50 metres wide and 17 metres high to celebrate Eurotunnel’s 25th anniversary. The artwork is the face of a young girl looking through binoculars to the other side of the Channel. In Folkestone, her eyes look out onto a beach frequented by families. This allegory of the binoculars shows the artist’s inspiration from her experiences in Folkestone, where she previously lived with her family, and the memory of the excitement of seeing the French coastline from the beach.

“I really wanted to create a piece of work that unfolds in both the UK and France and which involved young people. We worked with two classes of 10-year-old pupils who wrote their own words on the entrance to the Tunnel and who became, in a way, the spokespeople for this message of friendship and paying attention to each other”

"On the 25th anniversary of the Channel Tunnel, we wanted to remember that we, the UK and France, share a unique link, a geographical, historical, economic, cultural link that we keep going every day. This message has been magnificently created by the artist YZ with this little girl who has a little of her in France as well as in the UK, and who looks out permanently on both sides of the Channel.”

Inaugurated on 4 July 2019, this fresco will remain on the entrance of the Tunnel over the coming years to remind us of the importance of the link that unites the two countries.

Eurotunnel, a subsidiary of Getlink, manages the infrastructure of the Channel Tunnel and operates Truck and Passenger Shuttle services (cars and coaches) between Folkestone (UK) and Coquelles (France). In 25 years of operation, more than 430 million people and 86 million vehicles have travelled through the Channel Tunnel via Le Shuttle or Eurostar. This unique land link has become a vital link between the United Kingdom and continental Europe. It contributes to Europe’s vitality by bringing people, businesses and cultures closer together.

YZ (“eyes”) is an eye, before everything. An artist guided by a desire of humanity. Through a timeless aesthetic, YZ follows her own history and depicts our time and societies in a soft but very accurate light.

The human figure and its living space remain the main theme of the artist’s work. YZ attempts to illustrate man’s place in society, describing and decrypting our modes of life through images of the inhabitants of the cities she crosses.

Her approach is increasingly included in a global dynamic – alternately poster artist, documentary filmmaker, plastician, she takes over a space with which she creates an intimate relationship.

With very high demands, YZ handles a broad spectrum of projects, always trusting her instinct. Her work unquestionably follows a common thread, whose guiding line is the most complex and captive topic: the human being. 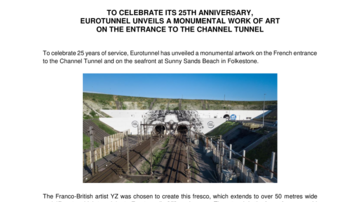 TO CELEBRATE ITS 25TH ANNIVERSARY, EUROTUNNEL UNVEILS A MONUMENTAL WORK OF ART ON THE ENTRANCE TO THE CHANNEL TUNNEL