When the Competition Appeal Tribunal (CAT) confirmed in December 2014 previous decisions by the Competition and Markets Authority (CMA), which sought to prohibit the operations of MyFerryLink, the Eurotunnel Group decided, on 9 January 2015, to sell the business and its related assets. The activities of MyFerryLink ceased on 29 June 20151.

The SCOP SeaFrance, which operated the MyFerryLink ships, appealed that decision and won their appeal in front of the Court of Appeal in May. The CMA then further appealed that decision to the Supreme Court, which upheld the decision by the CAT and brought an end to the possibility of the Eurotunnel Group being able to operate a maritime service between Dover and Calais.

The Eurotunnel Group is extremely disappointed by this decision as MyFerryLink had proven its capacity to provide a high quality, competitive service. MyFerryLink had hoped to restart an activity with the freight only ferry, Nord-Pas-de-Calais, which would have ensured 130 jobs. As the decision by the Supreme Court no longer permits this, the Eurotunnel Group will put its last ship, the Nord-Pas-de-Calais, up for sale. 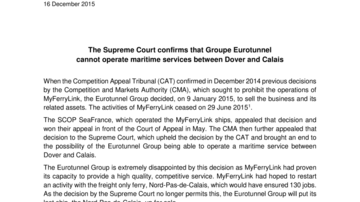