GB Railfreight today confirmed that the first three of a new fleet of refurbished 73/9s have gone into service following a 10-year lease agreement with Network Rail. They will be supporting the infrastructure provider’s ongoing track and engineering operations.

This increased power and versatility means that Network Rail will be able to cover a much wider area on their monitoring and possession work, extending beyond the southern region.

The award of this contract highlights the crucial investment that GBRf is making in supporting the growth of rail freight over the medium-long term. Earlier this year, GB Railfreight brought the first of their 21 new Class 66s into service, for use on various work across the network. At present, GBRf’s total fleet includes 72 Class 66s, 20 Class 73s, 16 Class 92s, four 0809s and 12 DI8 shunters. This number will increase with the arrival of an additional six Class 66s in January 2016.

John Smith, Managing Director of GBRf, said:
“GB Railfreight is delighted that the first of its new Class 73/9s have entered into service and that they will be supporting Network Rail with its infrastructure work across the UK rail network. These electro-diesel 73/9s are incredibly versatile and powerful, and can be used on a wide variety of routes across the regions. This deal is another sign of the significant investment GBRf is making in the domestic freight industry.”

Paul Gilbert, operations director for Network Rail National Supply Chain, said:
“Our infrastructure monitoring and engineering trains are absolutely vital to the work we do each and every day. The introduction of the 73/9s is a quick and cost effective way of boosting our fleet and will improve reliability and increase in our overall capability.”

Doug Loudon, Managing Director of Brush Traction, said:
“Wabtec, through its Brush Traction business, is delighted to have worked with GBRf to return these locomotives to service. The locomotives have benefited from a full physical overhaul as well as having had significant engineering upgrades applied to provide a highly engineered specification. Wabtec will provide full service support to GBRf and Network Rail over many years of service as part of its commitment to the program. The activity to refurbish a further seven locomotives is at an advanced stage in support of entry in to service later this year.” 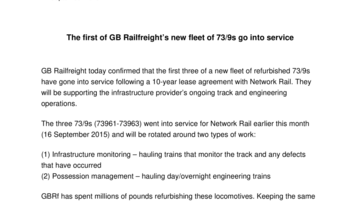