After three years of detailed study, the Intergovernmental Commission1 has granted Deutsche Bahn an operating certificate (Certificate B) to run passenger services through the Channel Tunnel2.

Groupe Eurotunnel believes that this long awaited decision will considerably enhance exchanges between the United Kingdom and northern Europe (Germany, Holland) and will over time add between 3 and 4 million new passengers per year to the 10 million already using the existing high speed passenger services.

This new chapter requires no additional investment as adjustments to the timetable and modifications to the paths through the Tunnel will suffice to accommodate the new traffic.

This increase in the choice of services offered by railway operators is a measure of the improvement in the transport sector as it brings major benefits to passengers.

The request by one of the foremost railway operators to open up direct services via the Channel Tunnel is proof of the significant attraction that the infrastructure offers. The Channel Tunnel provides a route that is fast, reliable and competitive. Groupe Eurotunnel’s access charges, set out by the two states in 1987 under the framework of the Railway Usage Contract (RUC), which runs until 2052, are particularly favourable to the development of new services: based principally on a charge per passenger, they limit start up costs for new operators whilst they build up their load factors.

“Twenty years after the start of commercial services, the Authorities have finally opened the Channel Tunnel to all. This is wonderful news for the millions of passengers in northern Europe who can now use this most environmentally friendly means of transport to travel to London”. 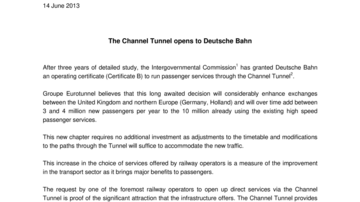