The Channel Tunnel is a £91.4bn trade link for the UK economy

The Channel Tunnel facilitates trade worth £91.4bn per year, representing a quarter of all UK trade in goods with the European Union, according to a new report from Ernst & Young.

The Channel Tunnel has fundamentally changed the way the UK does business, enabling integrated manufacturing across the continent and opening up new markets. Industrial sectors which depend on the Tunnel’s speed and reliability of service, include ‘Just-in-Time’ production for sectors such as the automotive industry, ‘express delivery’ for logistics companies and the rapid transportation of essential fresh food products.

As well as goods transported on freight shuttles and trains, the Tunnel also transports 21 million passengers a year via Eurotunnel’s Le Shuttle service and Eurostar trains. This facilitates inbound tourism via the Tunnel worth £1.7bn to the economy, supporting a further 45,000 jobs in the UK and 840,000 business trips which keep the UK’s services sector competitive.

Jacques Gounon, Chairman and Chief Executive Officer of Groupe Eurotunnel said: “The UK’s trading relationship with European countries continues to develop, regardless of Brexit. This means that the Channel Tunnel remains vital to the UK, to connect it with Europe and beyond and it will continue to form a key part of the UK’s transport infrastructure. One of the most striking aspects of this report by Ernst and Young is the geographical range of companies who rely on the Tunnel to do business. The Tunnel not only serves companies in London and the South East but right the way through the Midlands, the North of England and beyond.”

Peter Arnold, Director for Economic Advisory, EY said: “As we can see throughout this report, the Channel Tunnel connects the UK with continental Europe, by providing a service which cuts transport time and cost for businesses. The ability of the Channel Tunnel to link directly into the road and rail networks of the UK and continental Europe means it reduces physical barriers to trade. For a number of export and import sectors this is critical to their business models. The £91.4 billion of trade that passes through the Tunnel each year is vital to the UK and is likely to grow in importance as the economy continues to expand.

The report, which will be launched at a reception to Parliamentarians and policymakers this afternoon in the House of Commons, looks in-depth at the three sectors that depend on the Tunnel’s speed and reliability of service; ‘Just-in-Time’, ‘express delivery’ and fresh food transportation.

Steve Hanley-Cook from DHL Freight said: “Historically the Tunnel has provided transit time advantages such as efficient border checks and customs controls. It is however important, in light of upcoming changes to trade relations between the UK and continental Europe, that any agreement does not seek to dilute these advantages.”

The report also demonstrates the importance of the Tunnel to the UK regions. Goods transported through the Tunnel are exported from and imported to every region of the UK from the south of England to Scotland. Based on a survey of Channel Tunnel freight customers, the report shows the region which contributed the largest share of exports is the West Midlands (20%), closely followed by the East of England (18%).

A large proportion of the jobs supported by exports through the Tunnel are based in the West and East Midlands (40%) where around a third of the jobs are in the production of iron, steel and metal products, with the region exporting 55% of the total in this sector that is transported through the Tunnel.

The East of England is also a key source of jobs in export industries (16% of total supported jobs). This includes employment in sectors such as the production of computers and electronics and motor vehicles, parts and other transport equipment as well as being the region with the most jobs supported in sectors that export using postal and courier freight.

Meanwhile Scotland accounts for 5% of the total export value from goods transported via the Tunnel including £970m of computers and electronics and £300m of fish, fruit, vegetables and flowers.

The largest export product groups by value are postal and courier freight (£9.9bn) followed by computers and electronics (£7.9bn), motor vehicles, parts and other transport equipment (£6.1bn) and iron, steel and metal products (£3.9bn). According to the results of the survey of Eurotunnel customers, France is the most significant single destination (18%) of UK exports via the Tunnel. This is primarily driven by exports of postal and courier freight and chemical products.

Meanwhile, the EU is a key destination for car exports, accounting for 53% of demand for UK-built vehicles. The largest customer markets are Belgium, Germany, Italy, Spain and the Netherlands, who collectively account for around 70% of the total value of UK exports of motor vehicles to EU countries2 via the Tunnel.

Furthermore, timely delivery of fresh produce is essential for a number of UK food produce exports and their competitiveness. For example, £0.9bn of fish, fruit, vegetables and flowers are exported through the Tunnel and a further £1.4bn of meat is exported along with £2.1bn of processed and prepared food. Together these sectors made up 10% of the total value exported through the Tunnel. The main destinations of these food exports are Poland, France and Italy with the main sources of these exports being Scotland, the Midlands and the South of England.

Total imports via the Tunnel represent 22% of the value of UK imports from EU countries. The largest product groups by value were postal and courier freight (£17.5bn) followed by computers and electronics (£6.5bn), motor vehicles, parts and other transport equipment (£4.1bn) and textiles, clothing and leather products (£3.3bn). The results of the survey of Eurotunnel customers indicate that London is the largest consumer of goods imported through the Tunnel, accounting for 30% of the total value of imports. Approximately 33% of postal and courier freight imported through the Tunnel is also destined for London, reflecting the city’s focus on financial services, the largest user of these imports.

The West Midlands is the second largest importer (23%), driven by imports of intermediate goods by the region’s manufacturers, including iron, steel and metal products.

Other key findings include:

In order to capture the benefits the Channel Tunnel brings in a normal year, 2014 was used as a basis for the footprint, as this was the last year in which Tunnel operations were broadly unaffected by external disruptions. For consistency, figures presented throughout the report are on a 2014 price base. The contribution that the Channel Tunnel makes to the trade in services via business travel on Le Shuttle Passenger services and Eurostar, has not been directly quantified, but the benefits are discussed qualitatively. This report sets out the findings of this work, capturing the following key effects:

The report relies on a combination of primary and secondary research: Ipsos MORI (working with EY) conducted a survey with Channel Tunnel freight customers in May 2016. A sample of freight customers, which are distributed across Europe, was randomly selected from Channel Tunnel’s customer list and questions were emailed in advance of a telephone interview. A total of 205 interviews were conducted, which collectively represented around 20% of Channel Tunnel’s Le Shuttle Freight volumes, and information collected included data on the volumes, values and types of good transported through the Tunnel during 2014 and about the origins and destinations of goods transported.

The survey also included qualitative questions on reasons for using the Tunnel over alternatives as well as the impact of disruptions to Tunnel services.

The results of the survey have been used to inform this report, however, to protect respondents commercial interests, responses remain anonymous.

In line with best practice the analysis contained in this report has also undergone a peer review by economist Professor Peter Urwin, Director of the Centre for Employment Research and Professor of Applied Economics at the University of Westminster.

A major player in low-carbon transport, the Eurotunnel Group operates the cross-Channel Fixed Link, which is the fastest, safest and most environmentally friendly way of crossing the Short Straits. This rolling motorway, which has become a vital link for Europe in terms of industry, tourism and culture alike, is used by 2.5 million cars, 1.5 million trucks and 21 million people every year. High-speed passenger trains and rail freight trains also run through the Channel Tunnel. 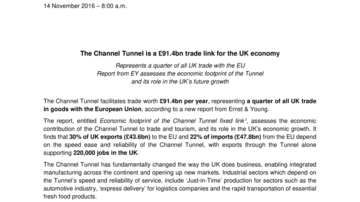 The Channel Tunnel is a £91.4bn trade link for the UK economy