Eurotunnel is delighted to welcome the new partnership agreed between the United Kingdom and the European Union.

This agreement, which ends a long period of uncertainty, will benefit both businesses and travellers alike.

It is with this in mind that we have launched the Eurotunnel Border Pass. This new service will enable customers to upload all the data needed for their journey to a virtual wallet, accessible during their crossing by Eurotunnel and the authorities of the two states, in a highly secure format.

Although this agreement has been reached only one week before the end of the Transition period, during which European Union law has continued to apply in the United Kingdom, this agreement will be applied by Eurotunnel from 1 January 2021.

Since the Referendum in the UK in 2016, Eurotunnel has worked with the two governments to provide its customers with the fastest and easiest service for crossing the Channel. The Group has invested €47 million to modernise and adapt its infrastructure to ensure the fluidity of both the border crossing and the traffic through the Tunnel. The Eurotunnel Border Pass in particular will enable the transfer of data needed for goods to cross the border from hauliers to Eurotunnel and then from Eurotunnel to the authorities in each country in a secure digital form, without truck drivers having to leave their vehicles or even present a document at the border crossing.

Yann Leriche, Chief Executive Officer of Getlink, stated: “Eurotunnel and its 2500 employees are committed to providing a reliable high-performance service to facilitate our customers’ lifestyles, as is our role as the uncontested leader across the Channel.”

Jacques Gounon, Chairman of Getlink, stated: “Getlink, an authentic bi-cultural Group is very well placed to benefit from this agreement. We thank the negotiators on both sides, who often don’t get the recognition they deserve.” 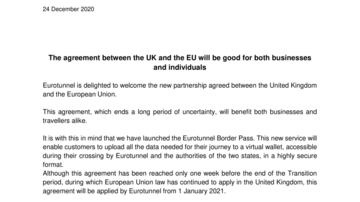