At the close of the exercise periodii for the 2007 warrants, attributed free of charge by Groupe Eurotunnel SA, 954,809,654 warrants, equivalent to 91.2% of the warrants in circulation at the start of the period, had been converted, corresponding to the issue of 32.4 million new shares.

The 2007 warrants, attributed free of charge to shareholders in the old Eurotunnel who took part in the Exchange Tender Offer in 2007 which was part of the Safeguard Plan that ended on 23 December 2009, have, under the terms of the issue contract, enabled those shareholders to benefit from the increase in value realised across the Eurotunnel group.

By 31 December 2011, all financial instruments which had been issued to enable the financial restructuring of the group had, without exception, been converted or reimbursed.

“With the strength that comes from having a simple and transparent capital structure and loyal shareholders, Groupe Eurotunnel can comfortably pursue its strategy and its development”. 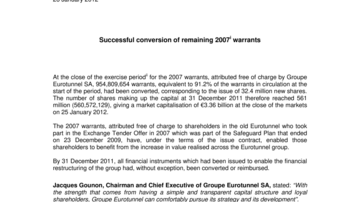