The Verdon Terminal near Bordeaux is ideally positioned at the crossroads of maritime and fluvial routes and is preparing to renew services under the new name TCSO, Terminal à Conteneurs du Sud Ouest (South west France Container Terminal).

Each passing day brings us closer to the return to the first division for the Verdon Terminal. Europorte has selected the Société de Manutention Portuaire d’Aquitaine to manage handling on the site. This company, created for the activity on the terminal has already made an investment of almost €10 million to acquire the two stacking cranes and shuttle carriers which will be delivered in mid-September.

From the autumn, the relaunch of the Verdon terminal will generate 30 full time jobs and mobilise a further 50 indirect jobs in the port and the railway activity it will create.

The geographic location and the reduction in transit time, which comes from the installation of a complete logistics chain from unloading ships to loading trains will enable the management of 70,000 containers from 2016 and will lead to a shift from road to the mass transit maritime, fluvial and rail modes in the port of Bordeaux hinterland.

Pascal Sainson, Chairman of Europorte stated “Europorte is delighted with the progress with this project which, thanks to the commitment of a collection of local, regional and national partners is taking shape and is now entering its final delivery phase”.

A development supported by The European Union, The French government and the local authorities

Third largest port on the Atlantic coast in terms of traffic volumes, Bordeaux Port Atlantique is also part of the European priority network for multimodal transport. In this context the EU has provided financial support for the Port of Bordeaux to develop the TCSO. The TCSO will bring together all container activity on one site using the latest equipment to be able to respond to customer needs and to increase maritime traffic.

The government and the local authorities have added to the financial package with a Government-Region contract.

This true deep water port at Verdon has unrivalled accessibility amongst the terminals on the estuary. It will enable maritime operators to benefit from the increasing opportunities in the estuary. The arrivals and departures will be made using the rail links to and from the hinterland (the whole South West), via the Bruges (near Bordeaux) freight zone.

“This ambitious project, which was initiated by the Grand port Maritime de Bordeaux, will be launched with the support of both European and national bodies, but also with the support of regional and local authorities. It is one of the greatest satisfactions that a public company like ours can achieve. The logic of modal shift which we support is highly visible and reinforces our belief that we are, above all, helping the economic development of our region.” Christophe Masson, President of the Grand Port Maritime de Bordeaux. 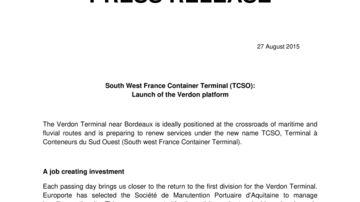