The naming ceremony on Thursday [17th July] continues a proud history of Huddersfield Town appearing across the railway network, as the Club was one of a select number of football clubs to grace the side of a B17 steam locomotive from the 1930s to the 1960s; a name plate from the original Huddersfield Town is still in possession of the Club.

This new locomotive naming was the brainchild of Town fan Pip Dunn, the editor of Railways Illustrated Magazine. Pip contacted Huddersfield Town and, after receiving the go-ahead from Town’s Board of Directors, he took the idea to GB Railfreight.

Having assembled at the Clubs PPG Canalside training complex in the morning, the guests were taken to Huddersfield Railway Station’s platform five for the naming ceremony, where Pip started proceedings before handing to John Smith from GB Railfreight.

After Town’s Chief Executive Nigel Clibbens said a few words, Sir Patrick pulled the cord to reveal the Huddersfield Town nameplate on the side of the locomotive number 66738.

Huddersfield Town Chief Executive Nigel Clibbens commented: “The Club is delighted that GB Railfreight has given this honour to Huddersfield Town. It is with pride that the name to grace a locomotive once again after a 50 year absence. We are really looking forward to seeing the locomotive haul trains not only through Yorkshire, but across the whole of England.

It is wonderful that in a World Cup year we could share this moment with our very own legendary World Cup winner Ray Wilson and to have the locomotive unveiled by a lifelong, ardent Huddersfield Town fan in Sir Patrick Stewart makes it extra special.

This event encapsulates everything that is good about Huddersfield Town off-the-field in our aim to be a focal point in the community. It is fantastic that we could share this afternoon with key figures from the Club’s history such as Peter Jackson and Andy Booth and hopefully it is something that Town supporters can take pride in too”.

John Smith, Managing Director of GB Railfreight, said: "GB Railfreight was honoured to become part of Huddersfield Town's history on the railway network. The football club is clearly hugely significant to local people in Huddersfield and we are pleased to support their work as our 66738 locomotive travels across the Yorkshire region. Despite my firm allegiance to Sunderland FC, this was a great day for everybody involved". 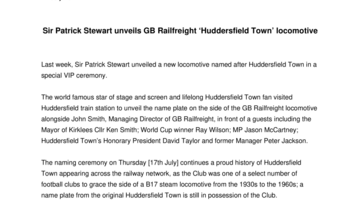