The British electorate has chosen to change its status in relation to the European Union.

The result of the referendum will not affect the activity of the Channel Tunnel Concession. The Group maintains its outlook1.

“The Channel Tunnel fixed link was established with an international treaty between two sovereign states. Our Anglo-French vocation is to offer our customers a constantly improving and more competitive transport service. I am confident that we will achieve our goals”. 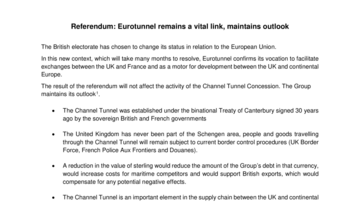