Eurotunnel Le Shuttle carried a record number of passenger vehicles on the Good Friday bank holiday. During the day almost 12,000 vehicles1crossed the Channel from Folkestone in Kent to Coquelles in France.

In total almost 15,000 passenger vehicles used the Le Shuttle service in both directions on Friday 25 March.

Le Shuttle Freight has continued its good end to last year and also carried record traffic in the months of January and February, for comparable periods, with close to 267,000 trucks transported during the first two months of the year.

"This new traffic record proves once again the attraction and efficiency of Le Shuttle, which was not affected by the changeable weather". 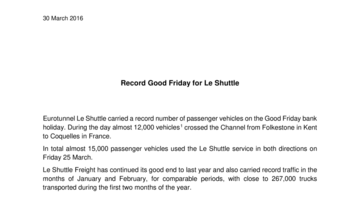