Yann Leriche, Group Chief Executive Officer said: "The good momentum seen in the first quarter confirms the relevance of our offers and our new services across all Group activities. The strong rebound in passenger traffic and the levels reached over the Easter holidays show that our customers are keen to resume their travels.”

Consolidated Group revenue is up 46% at a constant exchange rate, to €227.8 million, driven by the return of Le Shuttle and Eurostar passenger traffic following the gradual lifting of travel restrictions linked to the health crisis during the quarter, and the normalisation of truck traffic.

Revenue for the Shuttle activity was €137.6 million, up 55% in comparison to the same period last year, driven by growth in both passenger and truck traffic.

Railway Network revenue grew strongly, up 57% to €52 million, driven by the gradual upturn in passenger numbers travelling between the different countries served by Eurostar.

Europorte’s revenue increased by 3% to €33 million, driven notably by the launch of new services including the first intermodal service between Sète and Cologne.

This positive quarter, marked by organic strong growth, the reinforcement of yield, high booking levels observed for the summer period as well as the forthcoming ElecLink commercial commissioning, confirms the Group’s leadership. 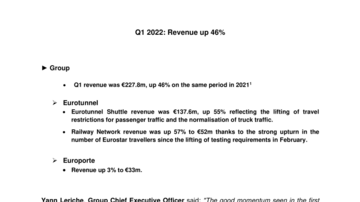