Perrette Rey joins the Board of Groupe Eurotunnel SA

The Board of Groupe Eurotunnel SA appointed Perrette Rey as an independent director of the company at its meeting on 20 mars 2013. Perrette Rey replaces Mr Hugues Lepic who has stepped down from the Board. The Board is very grateful for the excellent work he has achieved and for his valuable contribution.

As a result of this decision, the Board now includes four female Directors out of 11, equivalent to 36% of the total. The new Board will therefore be composed, together with its Chairman and Chief Executive Jacques Gounon, of the following individuals: Mr Philippe Camu, Mrs Patricia Hewitt, Mrs Colette Lewiner, Mrs Colette Neuville, Mr Robert Rochefort, Mrs Perette Rey, Mr Jean-Pierre Trotignon, Mr Philippe Vasseur and Mr Tim Yeo.

Perrette Rey, 70, holds a doctorate in corporate law and a post-graduate degree in economic management, both from the University of Paris I; she is a graduate of the Paris political studies institute (IEP), the Paris institute of business management (IAE) and the Paris centre for better management (CPA). She started her career with SOVA, a mechanics, and metal business prior to setting up her own business as a management, organisation and IT consultant then becoming responsible for a management and IT publication. She joined the Banques Populaires group where she was successively in charge of strategy, budget, finance and IT and later an advisor to the chairman of the Banques Populaires group. She was elected as a judge on the Paris commercial court in 1992, becoming in turn president of a chamber, vice-president and the first woman (and to date the only woman for 450 years) to be elected president of the Paris commercial court, then president of the general council of commercial courts, between 2004 and 2008. She chaired the French observatory for businesses in difficulty set up by the chamber of commerce and industry of Paris-Ile-de-France. Since 2008, she is a member of the French state shareholding commission. 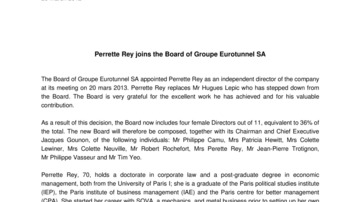 Perrette Rey joins the Board of Groupe Eurotunnel SA