Pascal Sainson, currently Director of Operations at the Channel Tunnel, has been appointed Chairman of Europorte, the holding company for Eurotunnel’s five rail freight subsidiaries, with effect from 17 May 2010. This role has, until now, been held by Jacques Gounon, Chairman and Chief Executive of Groupe Eurotunnel.

The holding of Europorte is composed on the one side of the ex French subsidiaries of Veolia Cargo which were acquired by the company on 30th November 2009 and on the other side by Europorte Channel, (Europorte 2 now called Europorte Channel was the first private operator to have obtained a European rail freight operator’s licence in France). Europorte comprises five subsidiaries: Europorte France, Europorte Channel, Europorte Link, Europorte Proximité and SOCORAIL. Europorte provides a wide range of services: national and international rail traction, local services on secondary lines and industrial services (managing branch lines, infrastructure maintenance and wagon loading and unloading).

“Europorte’s teams demonstrate how rail freight can be flexible, punctual and reliable. As the most environmentally friendly mode of transport, it has huge development potential. I am convinced that Europorte will be one of the foremost private companies in the regeneration of this sector”.

Pascal Sainson, 52, is an Ingénieur des Etudes et de l’Exploitation de l’Aviation Civile. After beginning his career with the Direction Générale de l’Aviation Civile, in 1983, he moved, in 1987, to become Responsable des Programmes et du Développement at Air Littoral, before becoming Directeur des Opérations Aériennes and Directeur des Programmes et de la Planification for TAT European Airlines. In 1996, Pascal Sainson joined Eurotunnel as Director of Service Delivery He was appointed to the operating board of Eurotunnel in April 2001 and has successively held the posts of Director of the Business Services Division, Shuttle Services Division and Operating Division and, since March 2009, he has been Director of Operations. 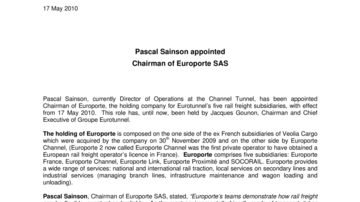