Approval given for new piggy-back wagon

Eurotunnel, which transports 1.2 million trucks each year and is a world leader in intermodal transport, is delighted that the Modalohr wagon has been authorised for use in the Channel Tunnel.

Modalohr wagons, built by LOHR Industries, are used on dedicated rail freight corridors across France. The low level, articulated wagons enable side loading of trucks on special terminals. They do not have canopies or superstructures of the type until now imposed for Eurotunnel’s Shuttles.

This is the first time since the opening of the Tunnel in 1994 that new railway rolling stock has been approved by the Inter-Governmental Commission (IGC). The project has been part of Eurotunnel’s strategy to apply the European Technical Specifications for Interoperability (TSI) to the Channel Tunnel to enable the growth of rail freight traffic between the UK and continental Europe. It is an essential addition to the open access policy operated by Eurotunnel which has, amongst other things, already seen the halving of access charges.

Authorisation of the Modalohr wagons will allow the planned Autoroute ferroviaire atlantique to be connected directly to the Channel Tunnel, potentially bringing significant new traffic to the UK.

“The application of the European Technical Standards for Interoperability to the Channel Tunnel will enable the development of rail freight traffic which could alone meet up to a quarter of the French Government’s environmental objectives”. 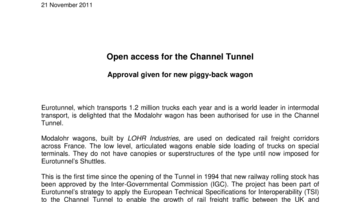