It is their responsibility now, working with DFDS, to define the conditions for the recruitment of staff1. The Eurotunnel Group would like to confirm that the only contractual relationships existing between MyFerryLink and the SCOP SeaFrance were the operating contracts which expire at midnight on 1 July.

At the beginning of 2015, given the succession of decisions by the Competition and Markets Authority (CMA) and the Competition Appeal Tribunal (CAT) based on the principle that only two maritime operators should be present in the Channel market, the Eurotunnel Group put its maritime business up for sale.

“Following the announcement of Judicial Administration, the priority is that contact is established between the SCOP SeaFrance and DFDS to discuss the issue of employment “ 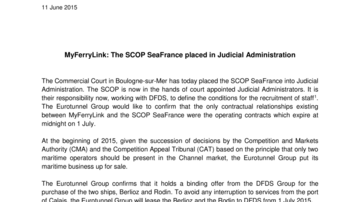