Following the succession of decisions by the Competition and Markets Authority (CMA), confirmed by the Competition Appeal Tribunal (CAT) decision of December 2014, to prohibit MyFerryLink from operating out of Dover, Groupe Eurotunnel was forced to announce the sale of its maritime business on 9 January 2015. The ships Berlioz and Rodin, owned by Groupe Eurotunnel, are now leased to DFDS from 2 July 2015.

Groupe Eurotunnel regrets that its MyFerryLink business has, for the past three years been the victim of an indifference on either side of the English Channel that has led to decisions which have proven to be contradictory and incoherent.

Today, the French Court has recognised that the bareboat charter agreements with the SCOP SeaFrance, agreements which expire on 1 July, cannot be renewed or prolonged. The long term lease to DFDS not being comparable to a sale, Groupe Eurotunnel will in due course seek permission to sell from the Paris Commercial Court. MyFerryLink believes that any action or declaration which intimates that the decision taken, after a tender process, to lease the ships to DFDS, could be modified or cancelled is irresponsible.

In the current context, MyFerryLink confirms that the only option possible to maintain a maximum of jobs is direct negotiations between the Judicial Administrators of the SCOP SeaFrance and DFDS. 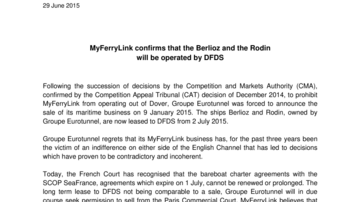