In line with its ambition to innovate and to improve customer service, Eurotunnel, in partnership with the French mobile operators, will install a 2G (GSM 900,DCS1800) and 3G (UMTS 2100) GSM-P telephone system which will allow Le Shuttle and high speed passenger train customers to use their mobile telephones inside the Channel Tunnel, in time for the Olympic Games. Offering a wi-fi service 100 metres below sea level, to the almost 20 million customers who travel through the 53km of the Channel Tunnel every year is a world first.

The installation, which will cost of €14 million, has been made possible by the signature of an agreement, today 06 March 2012, at the French Ministry for the Economy, Finance and Industry by Eurotunnel and the telecoms operators in France, Bouygues Telecom, Orange SFR and Free1.

The installation of this additional, mobile telecommunications service has been made possible as Eurotunnel is already in the process of installing the latest version of GSM-R2 railway signaling equipment. The choice of the same equipment supplier for both GSM-P and GSM-R, Alcatel- Lucent, will ensure the compatibility of the infrastructure and enable costs to be controlled whilst accelerating the installation. The French operators will provide an extension of their 2G/3G coverage through the South running tunnel (running France-UK) via a transmitter cable and optical repeaters positioned every 750 metres. The North running tunnel (UK-France) will be covered by British operators after the Olympic Games.

“This agreement means that from now on customers travelling through the Channel Tunnel will be able to use the full range of 2G and 3G mobile communication services. I am delighted with this achievement. I would like to thank Eurotunnel for their initiative, the major French mobile operators for their enthusiasm and Alcatel-Lucent for their savoir-faire in delivering the technical solution."

" Eurotunnel, the vital link between the UK and France, is proud to commit to this investment which will enable the connection of peoples, nations and cultures in this time of instant communications. Eurotunnel is sure that enabling mobile communications from below the waves will be an attraction for many customers.” 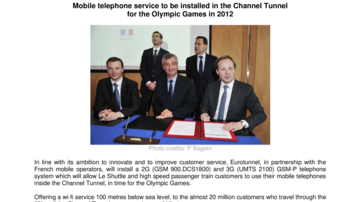