Laurent Fourtune has been appointed Chief Operating Officer for the Fixed Link, starting on 12 March 2018. He will report to François Gauthey, Deputy Chief Executive Officer. Michel Boudoussier is appointed Chief Corporate Officer, at the Group level.

Laurent Fourtune, 48, studied at the Ecole National Supérieure Ulm and Ohio State University. He is a Civil Engineer and has industrial experience in transport infrastructures and their operations. He started work in the Engineering department in Seine Saint-Denis, responsible for road surfaces on the A1 and A86 motorways. In 2001 he joined the office of Jean-Claude Gayssot as a technical advisor, where he was responsible for the project to re-open the Mont Blanc Tunnel to heavy goods vehicles. Subsequently, in 2002, he moved to Ile-de-France Mobilités (previously STIF) as Director of Investment Projects where, amongst others, he ran the project to regenerate the RER B and install 70 km of tramway. In 2008 he became Service Director at Vinci and then, in 2010, he joined the Engineering service at RATP as Deputy Director. Since 2012 he has been Director of Project Coordination for RATP and member of the Committee of Directors. 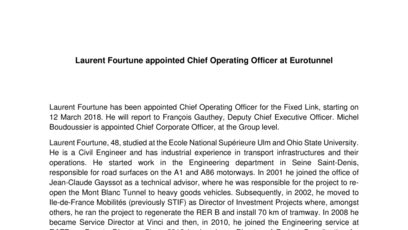