Jean-Pierre Trotignon, Eurotunnel Deputy Chief Executive, has decided to step down from his role on 31 May 2009, due to personal, family circumstances.

Jean-Pierre Trotignon has successfully led Eurotunnel’s operational and commercial reorganisation since 2005 and helped to build profitability. He will continue to use his skills to further the group’s ambitions, and, in particular, he will work on projects vital to the future of the company such as improving tunnel infrastructure protection in the event of fire and the conception of a third generation of Truck Shuttle.

Jean-Pierre Trotignon’s current responsibilities will be undertaken by the remaining members of the management board, reporting directly to Jacques Gounon, the Chairman and Chief Executive. 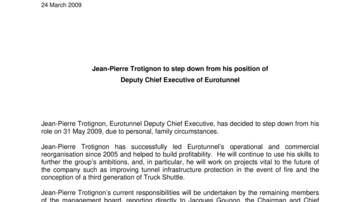