Following the disturbances caused to its business by the intrusion of illegal migrants coming from the Sangatte centre between 2000 and 2002, Eurotunnel had petitioned the ad hoc Tribunal*, on 17 December 2003, under the legislation relating to the Concession**, to seek compensation for damages suffered.

In its ruling of 30 January 2007 published on 23 February 2007, the ad hoc Arbitration Tribunal has recognised Eurotunnel’s right to compensation. The amount will be determined by the Tribunal at a later date.

The ruling, made public at the conclusion of the first phase, recognises that the two States, United Kingdom and France, must, under the terms of the Concession, “take all measures (…) necessary for the operation of the fixed link by the concessionaires (…)”. The Tribunal concludes that the concessionaires (The Channel Tunnel Group Limited and France Manche SA) have the right to be compensated for losses which result from the States defaulting on their responsibilities as those who have granted the concession.

The Tribunal must now set a timetable for the second phase of the procedure to determine the amount of loss and its compensation. In 2004, Eurotunnel estimated the loss over the period at £30 million, of which £17 million was security costs and £13 million was lost revenues. At 31 December 2006, the loss is estimated at around £35 million.

**ad hoc international Tribunal Arbitral as set out in article 19 of the Treaty of Canterbury, in article 40 of the Concession Agreement of 1986 and the Arbitration Protocol of 1987

NB: The Tribunal has also examined a petition which Eurotunnel joined to the process in December 2004, relating to the distortion of competition created by the excessive support received from the authorities by SeaFrance since 1998 in the form of recapitalisation, the use of the GIE fiscal status and the reimbursement of employer’s contributions and other public guarantees. This additional request concerning SeaFrance was rejected because the Tribunal believed that the texts of the Concession agreement did not allow it to rule on this part of the litigation. 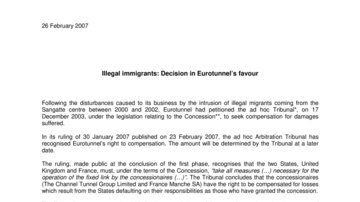