On 23rd June, the United Kingdom voted to leave the EU, giving rise to a period of uncertainty. Eurotunnel, holder of the concession to operate the Channel Tunnel Fixed Link until 2086, considers that this process, which will lead to two years of negotiations, will not impact the vitality of trade and tourism between the UK and continental Europe.

The report, Economic footprint of the Channel Tunnel Fixed Link, from EY underlines the importance of traffic flows via the Channel Tunnel. 2016 proved that the cross-Channel market continued to increase. Eurotunnel in particular had a record year, transporting more than 1,640,000 trucks across the short straits.

"Since 23 June 2016, Eurotunnel has mistakenly been used as a reference for the uncertainty caused by Brexit. However, the facts show that the vital activity of the Channel Tunnel is robust and thriving". 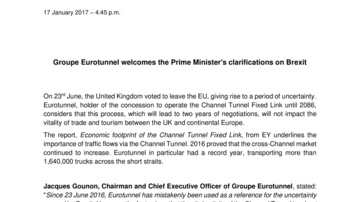