The Competition Commission has today, 19 February 2013, announced its provisional findings in relation to the acquisition by GET SA of assets previously owned by SeaFrance and the creation of a new competitor in the cross-Channel market, MyFerryLink.

Eurotunnel is not surprised at the position of the Competition Commission, but will challenge the provisional findings which conclude that the addition of the new operator, MyFerryLink, would be detrimental to competition and could lead to an increase in prices.

Eurotunnel considers that the acquisition of the ex SeaFrance ships, nine months after that company ceased all operations, and the creation of a new competitor in the cross-Channel marketplace, MyFerryLink, constitutes an increase in competition and brings additional choice for customers.

This sentiment is supported in the Competition Commission's summaries of hearings with cross-Channel customers, using both ferry and Tunnel services themselves, and which are published on its own website. 1

“Eurotunnel intends to continue to work with the Competition Commission to allay the concerns raised by existing ferry operators and to demonstrate that the creation of MyFerryLink is a good thing for the market as it is both pro-customer and pro-competition”. 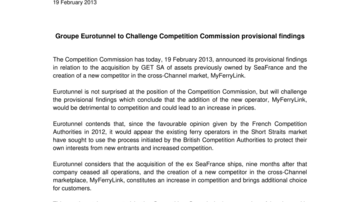