Groupe Eurotunnel has taken a significant step towards the implementation of new SAFE stations (firefighting stations) in the Channel Tunnel designed to combat fires using detection and aspersion.

The contract was agreed on 9 November 2009 with a consortium comprising the companies RodioJ, Fogtec, ACIS, Eiffage and Spie. The German group Fogtec is market leader in land-based water mist systems.

A full-scale test to evaluate the Fogtec system was carried out in Spain on 7 and 9 April 2010.

This test was performed under live conditions in intense temperatures (powerful enough to reach and even surpass 100 and 150 MW, which equates to a fire involving 40 cars) and results are extremely positive; they demonstrate the efficacy of the water mist to contain a fire and limit or even halt its propagation. The system offers many benefits including fast activation and easy access for the rescue services.

“Safety is the number one priority at Eurotunnel. That is why we are constantly innovating and continue to maintain a high level of investment in this area. The new SAFE stations, the only of its kind in the world, complete the many safety installations and equipments already in place.”

“The water mist assures effective control of the fire. A system such as this aids in the evacuation of people and enables the rescue services to work with increased speed and safety. Due to the ability to control the fire and the minimal amount of water used, structural damage is considerably reduced. We are pleased to work together with Eurotunnel, operators of the world’s longest undersea Tunnel. The team of Eurotunnel has impressed us with its technical input.”

Each SAFE station around 870 metres long will be equipped with a heat detection system. Once the train has stopped, a “mist” of water will be immediately vaporised in the section where the fire started. Unlike sprinkler systems, the water mist does not need to be aimed precisely at the source of the fire. It creates a shower of micro-droplets which absorb the oxygen and heat when they come into contact with the fire. In this way, the fire is suffocated, preventing the fire from reaching temperatures above which the infrastructure in the immediate area surrounding the fire, starts sustaining damage. The SAFE station concept devised by Eurotunnel introduces various innovations which have been filed for a patent. The SAFE stations also make the evacuation of passengers easier in the event of a hypothetical breakdown of Eurostar trains when there is no risk of fire.

The SAFE stations complete a wide range of actions centred on reducing the risk of fire developed by Eurotunnel within the “Salamander” plan. In particular measures include the reinforcement of prevention by inspecting lorries before loading and changing the rules of engagement for first line rescue services. 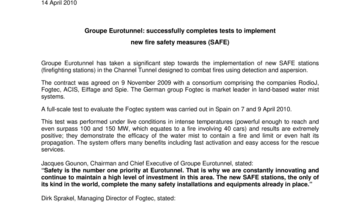