The Eurotunnel Group has decided to sell its maritime activity, MyFerryLink, as the conditions necessary to develop freely did not exist. The Group, which regrets that the SCOP SeaFrance has not had the support it needed to be able to present a takeover proposal, confirms that it holds a binding offer from DFDS for a let to buy sale of the ferries, Rodin and Berlioz.

The CMA should not oppose the completion of this sale which will lead to two maritime operators of equal importance.

With this sale, the Eurotunnel Group will ensure that the activity remains in Calais, a situation which was not achieved when the SeaFrance Moliere was sold by its owner, Le Credit Lyonnais, to be operated in the Irish Sea.

The Eurotunnel Group believes that the constructive manner in which DFDS conducted itself during the recruitment of ex SeaFrance personnel in 2012 gives hope for the best solution possible with regard to preserving employment1, without interruption to services.

With regard to the Nord Pas de Calais, the Eurotunnel Group, in order to maintain its transport operations, will ask the competition authorities to lift the current prohibition and to enable it to be operated in coordination with the Fixed Link

The Eurotunnel Group, after having supported this activity for three years, hopes that all those involved will support MyFerryLink in a responsible manner through this transition which has been imposed upon it. 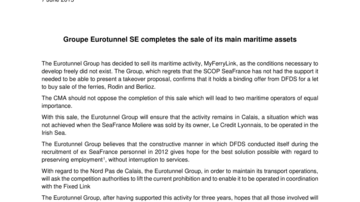