Groupe Eurotunnel SA: Results and traffic up in the first half of 2014

“All areas of our business are growing. The Fixed Link achieved a record level of operating margin in a very active cross-Channel market. The new environmental constraints which will be imposed on the ferry companies from 1 January 2015 reinforce the attractiveness of the Fixed Link.”

Significant events in the half year

The European Commission indicated in April to the French and British governments that it has dropped its objections set out in its reasoned opinion of 20 June 2013 linked to the level of access charges for the Channel Tunnel, thereby validating Eurotunnel’s charging structure and economic model.

The Competition and Markets Authority (CMA) has prohibited MyFerryLink from operating the Berlioz and the Rodin from Dover within 6 months from the date of the official order, even though this decision was rejected on appeal in December 2013.

The Fixed Link: solid growth in a highly competitive environment

During the first half of 2014, revenues from Shuttle Services increased by 6%, by comparison to the first half of 2013. The car activity has been sustained with 1,120,487 vehicles (+5%) and a very strong market share of 54% in a slightly growing cross-Channel market (+1%), Truck traffic has increased by 3% to 698,531 trucks. Eurotunnel continues to benefit from the upturn in the UK economy and to attract customers with its frequent shuttle departures. In a growing market, Eurotunnel has maintained its established market share at 38%.

Revenues from the railway network increased by 3% in the first half year. For Eurostar, this positive trend slowed during in the spring and was affected by the SNCF strikes in June (no Eurostar cancellations, but as connections were not guaranteed, some passengers were dissuaded from taking the train) and limited passenger growth to just 2% compared to the first half of 2013, the 5 million passenger mark has been passed for the first time.

Eurostar has also announced that the arrival of the new Siemens Velaro trains which will significantly increase the comfort and attractiveness of its services.

The rail freight business grew substantially (+15%) due to the commercial impact of the ETICA (Eurotunnel Incentive for Capacity Additions) scheme which provides support for start-ups and despite the impact of the SNCF strike during the month of June which caused major disturbance to traffic.

Europorte, which comprises the rail freight subsidiaries of Groupe Eurotunnel SA in France and the United Kingdom, continues to see strong growth in revenues (+10%) as a result of new contracts. These require additional start up costs, which explains the 13% increase in operating costs; the SNCF strike which prevented Europorte trains from circulating in France in June also contributed to the deterioration in the operating margin.

GB Railfreight, the third largest freight operator in the UK also continued to grow thanks to the strengthening of growth areas in the United Kingdom particularly where intermodal and bulk transport activities have benefitted from the economic upturn. Amongst the numerous contracts signed, the 11 train per week Sibelco contract to transport silica sand from Kings Lynn in Norfolk to Goole in Yorkshire stands out.

MyFerryLink: a credible alternative in the cross-Channel market

Freight traffic has leapt by 30% despite the series of negative announcements from the CMA, which is a clear indication of customer support for MyFerryLink. For cars, a continuing lack of awareness of MyFerryLink is slowing its progression.

It is on behalf of the customers who are attracted in significant numbers to the quality service offered by this maritime operator that Eurotunnel is appealing the prohibition, decreed by the CMA, from operating out of Dover. This decision, if it is confirmed, would lead immediately to a reduction in consumer choice across the Channel and would probably increase prices for consumers.

A reduction in net finance costs

The consolidated figures for the first half of the year show an increase of €12 million in EBITDA to €216 million despite a highly competitive market. Revenues and the operating result are subject to significant seasonal variations through the year.

For the Fixed Link, this is the fifth year in succession with an increase in EBITDA, which has reached a record level (€221 million).

Operating costs for the Fixed Link have increased by 6% to €172 million, although comparison with the previous year must take into account an exceptional insurance indemnity received in 2013.

For the first six months of the year, net finance costs have reduced by €6 million as a result of the impact of the reduction in the inflation rate in the UK on the cost of the indexed tranche of the debt and of debt repayments.

Free cash flow at the end of June amounted to €215 million.

For the first half of 2014, the Group has recorded a net loss of €11 million. Excluding the losses from MyFerryLink, the consolidated net result for the Group is positive at €3 million. 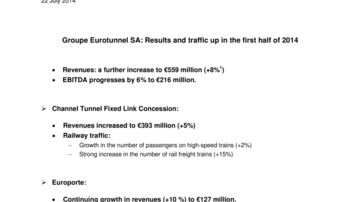 Groupe Eurotunnel SA: Results and traffic up in the first half of 2014