Philippe de Lagune, who previously held the post of French Safety Coordinator for the London 2012 Olympic Games, joins Groupe Eurotunnel SA on 09 September 2013 as Safety and Ethics Director. He will have responsibility for the safety of the vitally important site of the Channel Tunnel.

He has most recently been working at the request of the French Prime Minister on the reception of Afghan interpreters who have worked for the French armed forces.

Philipe de Lagune holds a Masters degree in Law and was called to the Bar in Paris where he worked as a Barrister from 1972-1976. He was subsequently appointed Chef de Cabinet to the Director of the Judicial Police based at the Quai des Orfèvres, where he was principally responsible for the organisation and safety of international conferences, exhibitions, official visits and the safety of transport for the French President. 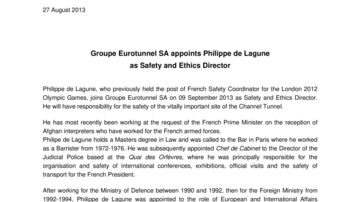