The Competition and Markets Authority (CMA) published a draft order on 23 July 2014, with the intention of preventing Groupe Eurotunnel from operating ferries from the port of Dover. The draft was published to enable consultation with the interested parties.

In this context, Groupe Eurotunnel prepared a certain number of observations for the CMA with the objective of, amongst other things, enabling MyFerryLink to continue its business under optimal conditions whilst awaiting the outcome of the appeal which will be heard on 24 and 25 November 2014.

Today, the CMA has published its final order, having rejected all of the observations put forward by Groupe Eurotunnel. This order, which prevents MyFerryLink from continuing its business would come into effect six months after a rejection of the appeal brought by Groupe Eurotunnel against the CMA's decision.

This position confirms in Groupe Eurotunnel's opinion the unalterable determination of the CMA to bring to an end the activities of MyFerryLink.

As such, and under the hypothesis that the Competition Appeal Tribunal (CAT) simply remits its judgement to the CMA, as it did in December 2013, Groupe Eurotunnel would have to reflect on the possibility of continuing to support the activity. The order published today could weigh heavily on the forthcoming annual contract negotiations between MyFerryLink and the major cross-Channel freight transporters.

Groupe Eurotunnel reaffirms that acquiring assets, in an open auction through the Paris Commercial Court, can in no way be compared to the purchase of the activities of SeaFrance, as the CMA interprets it. Entrusting the operation of the ferries to maritime workers, for all that many had previously worked for SeaFrance, regrouped into an independent workers co-operative (SCOP), is neither illogical nor reprehensible.

Groupe Eurotunnel strongly regrets the position that the CMA holds and its inevitable consequences. 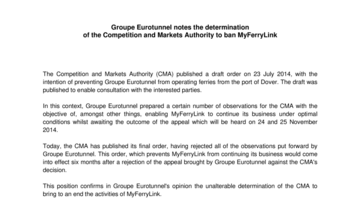