The Competition Commission has reaffirmed its competence by considering that Groupe Eurotunnel took over SeaFrance and that this takeover falls under the Merger Act. As a result, the Competition Commission has concluded that it has no reason to change its opinion and that MyFerryLink must cease operations, even though MyFerryLink provides a new and appreciated proposition for consumers.

Groupe Eurotunnel confirms that SeaFrance ceased operations in November 2011 and was liquidated six months before it acquired the ferries and leased them to an independent operating company, the SCOP. Groupe Eurotunnel cannot understand how it is possible to acquire a company six months after it has ceased to exist and nine months after the closure of all operations. Groupe Eurotunnel also points out that the decision of the Competition Commission is completely contradictory to that expressed previously by the French competition authorities.

Groupe Eurotunnel emphasises that over the past two years the market has in no way been negatively affected by MyFerryLink. On the contrary statements by a competitor confirming that it would have to leave the Short Straits are, in the light of the evidence from public statements about their financial strength and ambitions to expand, entirely incredible.

To conclude, if prior to its final decision the Competition Commission does not wish to review its perspective on the competition which exists across the Strait of Dover in the light of the current reality, and not based on suppositions from two years ago, Groupe Eurotunnel will withdraw its ferries from the Channel. 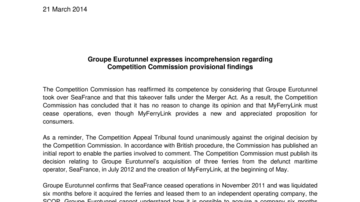