The Competition and Markets Authority (CMA) has just confirmed the decision that it made last year (June 2013), to ban the ferries Berlioz and Rodin from the port of Dover for ten years:

MyFerryLink: 9% show that the competitors in the ferry market have strong positions that are in no way threatened by MyFerryLink.

The analysis made by the CMA is the opposite of that made by its French counterpart, even though it relates to the same market.

Groupe Eurotunnel asked the CMA to seek a convergence of views with its French counterpart, through the offices of the European Commission. Groupe Eurotunnel cannot understand why the CMA refused such an opportunity to resolve this crisis.

Groupe Eurotunnel believes that by removing one competitor from the market, the CMA is creating a de facto duopoly in the maritime sector which will lead to an increase in prices for consumers and a reduction in revenues for the ports of Dover and Calais, without taking account of the social drama it will generate for the 600 employees of the SCOP.

Groupe Eurotunnel is astonished by the length of the prohibition, which includes any minority participation, and also that the CMA recommends selling the ships to another operator. Groupe Eurotunnel can only appeal such an un-just decision.

“The decision by the CMA is a denial of the reality of the situation. It penalises the consumer and puts 600 people out of work without any real justification.” 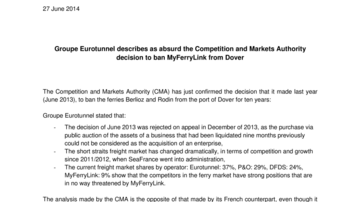