The founding texts relating to the establishment of the Channel Tunnel Fixed Link (the Treaty of Canterbury and the Concession Agreement), require the two states, beyond their national responsibilities, to enable the concession holder to conduct its transport activity securely.

Since the arrival of migrants in the region around Calais, Eurotunnel has, beyond its contractual obligations, invested massively in both physical (fences, lighting, cameras, infra-red detectors…) and human resources to protect the terminal in Coquelles: a total sum of more than €160 million, including €13 million in the first six months of 2015. These considerable investments have already been followed in the second half of the year with new fencing around the platforms. Security patrol staff has been doubled to reach 200 employees, including sniffer dog patrols.

To support the efforts of law enforcement in the Calais area, Eurotunnel has also provided buses to the authorities to enable them to remove any migrants intercepted.

Eurotunnel has kept the Intergovernmental Commission for the Channel Tunnel and the Authorities informed, over several months, regarding the explosion in the number of migrants present in the Calais area and of the sometimes dramatic consequences that this has brought.

Since 1 January 2015, Eurotunnel has, using its own resources, discretely intercepted more than 37,000 migrants, who have been handed over to the law enforcement authorities, and has registered thousands of complaints, all of which have been filed with no further action by the Procureur of the Court in Boulogne.

The continuous pressure exerted every night is above and beyond that which a concessionaire can reasonably handle and requires a constructive and appropriate response from the governments.

In this context, Eurotunnel and its employees, who hold to their task despite the psychological pressure that weighs on them, continue to guarantee a rapid and safe Channel crossing for its millions of customers. 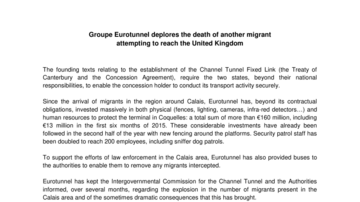