Given the constancy of the position held by the Competition and Markets Authority to prohibit MyFerryLink from access to the Port of Dover, as confirmed by its recent decision to appeal before the Supreme Court and its latest letters, Groupe Eurotunnel was obliged to announce the search for a new owner for its maritime business at the start of the year.

The SCOP SeaFrance, has shown an interest but has not, despite all its efforts, been able to raise the finance necessary.

The SCOP is unable to make an offer given its financial position, which has been exacerbated by a request from SNCF to reimburse €15 million.

Groupe Eurotunnel, not wanting to see three years hard work come to nothing, would like to set out the steps already taken and those that will follow:

During this difficult transitional phase, Groupe Eurotunnel is renewing its call to all the parties concerned to bring a new start to all of these activities during the coming week and thereby meeting staff and customer expectations. 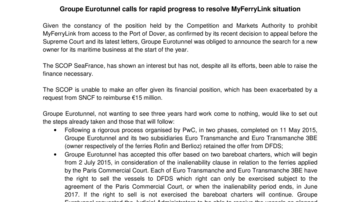