A graduate of the Ecole Polytechnique, holder of a DEA in Organisational Strategy and an Engineer from the Ponts et Chaussées, François Gauthey joined the Private Office of the Minister for the Economy, Edmond Alphandery, in 1993, as a technical advisor. In 1995 he became head of Customer Services at Aéroports de Paris, before becoming advisor in charge of equipment, housing and transport in the Private office of Prime Minister, Jean-Pierre Raffarin. He subsequently took up the office of Directeur de Cabinet for François Goulard, Secretary of State for Transport and the sea, in 2004 and in the Ministry for Higher Education and Research in 2005. In 2006 he took up a role as Directeur Général for navigable waterways in France. In 2007 he joined the Sanef Group, shortly after its privatisation, and held the role of Directeur Général until 2014. Since November 2014 he has been Chairman and Chief Executive of Sanef ITS Technologies. 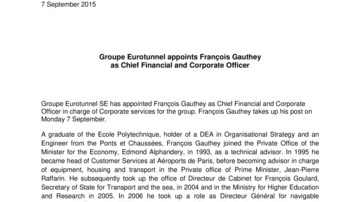