Annual General Meeting of April 30, 2020: Getlink proposes the appointment of 2 new independent Directors and staggered terms of office for Board members

Getlink SE announces the proposed appointment of 2 new independent directors at the general meeting on 30 April 2020. This proposal completes a thorough and robust selection and reflection process on its composition, led by the Nomination Committee and the Board of Directors.

The new directors whose appointment is proposed are:

Sharon Flood, British who will bring to the Board of Directors her recognised financial expertise, particularly in the railway sector, as well as her Franco-British culture and her skills and experience as an independent director of international companies.

Jean-Marc Janaillac, French, who will bring to the Board of Directors, through his recognized stature as Chairman and Chief Executive Officer, a wealth of experience in governance, particularly in the regulated infrastructure sector, as well as in-depth knowledge of international traffic and the economic model of concessions.

The areas of expertise and the diversity of know-how of these two directors will be major assets for the development of Getlink.

The Board will also propose to the General Meeting of April 30, 2020, the staggered renewal of the terms of office of four directors:

Colette Neuville, Chairwoman of the Remuneration Committee and Lead Director has decided not to seek the renewal of her term of office, which will expire at the end of the General Meeting of 30 April 2020. The same applies to Philippe Vasseur, who having reached the end of his 12-year term of office will retire early. The Board of Directors pays tribute to Colette Neuville and Philippe Vasseur for their sustained and ongoing commitment to the development of Getlink SE and their contribution to the evolution of governance.

Sharon Flood: A fellow of the Chartered Institute of Management Accountants with a university degree in mathematics, and an MBA from INSEAD. Sharon Flood has extensive experience in finance and strategy across a number of companies including Castorama/Kingfisher and John Lewis Department Stores, where she served as finance director. She has also served as a group chief financial operator for Sun European Partners. Her varied career includes 5.5 years as a director of Network Rail, the owner of the UK’s Rail Infrastructure, where she chairs the audit and risk, treasury and environmental sustainability committees, and 4 years as president du conseil de surveillance for S T Dupont SA. She is currently chair of audit at both Pets at Home plc, the leading UK pet care company, and Crest Nicholson plc, a UK housebuilder, as well as a trustee of both the Science Museum Group and the University of Cambridge. Sharon will join the Board of Getlink in September after she has completed her second term at Network Rail.

The Combined General Meeting will be held on 30 April 2020 at 10 a.m. Maison de la Chimie, 28 bis Rue Saint-Dominique, 75007 Paris. The notice of meeting including the agenda and draft resolutions was published in the BALO of March 4, 2020. The information and documents relating to this meeting referred to in Article R. 225-73-1 of the French Commercial Code will be posted on the company's website at the following address: https://www.getlinkgroup.com. 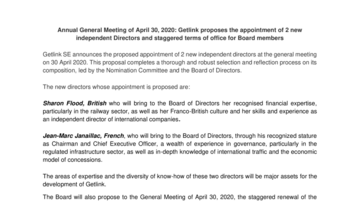