Governance: Carlo Bertazzo coopted to Group Board of Directors

The Getlink SE Board of Directors has today co-opted Carlo Bertazzo as a director. He replaces Giancarlo Guenzi, for the remainder of his term of office[1] following his resignation. The ratification of this co-optation will be proposed at the Ordinary General Meeting of Getlink, called to approve the account for the 2020 fiscal year.

Carlo Bertazzo, 54, is Chief Executive of Atlantia[2], the infrastructure group, since January 2020. He has held management positions in several companies of the Edizione Group, the holding company which has been, among other, the largest shareholder of Atlantia since 2000,, where he played a key role in the diversification of the group’s activities. He is currently a member of the Autostrade per Italia S.p.A and Abertis Infraestructuras boards.

The Getlink Board of Directors thanked Giancarlo Guenzi for his active role in the Board’s work and welcomed the arrival of Carlo Bertazzo, a non-independent Director, who, with his extensive experience in infrastructure, will be able to bring to the Board of Directors expertise in safety and security, and share his solid expertise in finance and experience in the management of international industrial groups.

“I am happy to be joining the Getlink Board of Directors, an important investment for the Atlantia Group, a business that has again confirmed its fundamentals and is working to reinforce its resilience while ensuring it provides efficient and eco-responsible services” said Carlo Bertazzo. 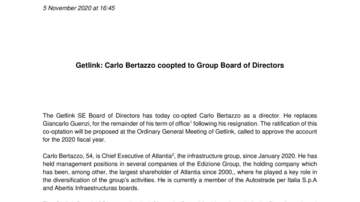 Governance: Carlo Bertazzo coopted to Group Board of Directors 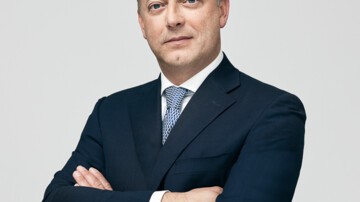