Jacques Gounon, Chairman and Chief Executive of the Group said: “Getlink has achieved its highest net result since 2007 on a like-for-like basis. The Group performed robustly in 2019, in line with our forecasts and in line with market expectations, despite a changing and complex environment.”

The IGC has announced that it has received the final dossier, and that it intends to take its final decision on authorising the installation of the cable in the Tunnel in April 2020.

The Group’s consolidated revenue for the 2019 financial year amounts to €1.085 billion, a very slight increase compared to 2018.

Consolidated EBITDA was in line with guidance at €560 million, down €12 million compared to 2018 at a constant exchange rate.

The cost of net financial debt fell by €14 million to €257 million due mainly to the favourable impact of lower British and French inflation rates on the cost of the index-linked tranche of the debt.

Confident in the robustness of its economic model and the solid results in 2019, the Group confirms its intention to pursue its dividend policy in the service of its shareholders. Accordingly, it will propose at the AGM to increase the dividend to €0.41 per share for the 2019 financial year, an increase of 14% compared to 2018.

In an economic context that is still uncertain following the UK’s exit from the European Union on 31 January 2020 and with possible consequences of the COVID-19 coronavirus crisis, the Group has set a financial target for a 2020 EBITDA of €580 million at an exchange rate of £1=€1.14 and on a like-for-like basis.

The uncertain short-term environment does not diminish the Group’s confidence in the soundness of its various businesses and their growth potential in the medium- and long-term. The Group maintains its objective of exceeding €735 million in EBITDA by 2022 (at £1=€1.14) following the entry into service of the ElecLink electricity interconnector mid-2021 or shortly thereafter. 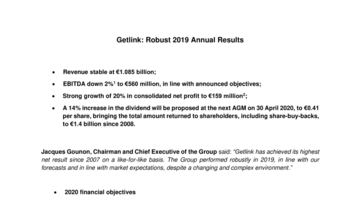