Getlink: Revenue up in third quarter, driven by growth in passenger traffic and ElecLink go-live

Yann Leriche, Group Chief Executive Officer commented: "In the third quarter, the Group has stepped up its efforts to consolidate the momentum of the first half of 2022. The growth in passenger traffic, our marketing investments and ElecLink entering its operational phase allow us to establish a higher level of revenue compared to 2021 and confirm the attractiveness of our low-carbon solutions for customers.”

The Group's consolidated revenue in the third quarter increased by 109% at a constant exchange rate, to €466.1 million. Having started its commercial operations on 25 May 2022, ElecLink contributed €107.4 million in revenue to the Group during its first full quarter of activity.

Revenue from the Shuttle activity reached €235.1 million, up 58% in the third quarter compared to the same period in 2021, driven by growth in Passenger volumes and targeted marketing actions.

Railway Network revenue was up 116% at €84.3 million, driven by the recovery in Eurostar traffic.

Europorte increased its revenue to €32.9 million.

Revenue for the first nine months (1 January to 30 September) For the first nine months of the year, Group revenue reached a level of €1.043 billion, up 89% compared to 2021, driven by additional revenue from ElecLink and the return of passenger traffic volumes. 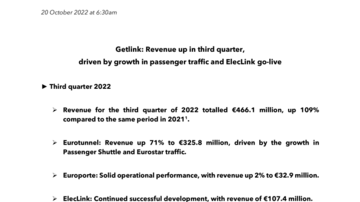 Getlink - Revenue up in third quarter